Shoplifting is danger. Shoplifting is defiance. Shoplifting is compulsion, and it is satisfaction. You steal without thinking or feeling, but you wonder later if you might have been angry, if there was some sign you missed, something you shouldn’t have been feeling that made you do what you did. You hate yourself after, not for the peppermint flavor of theft on your tongue, but for the privileged certainty that you won’t be caught.

A therapist might think that you steal to manage anxiety or as a quirk of disordered neurology. But you think you are clever, putting one over on the system. You get a bad flu along with half of the city and suffer because your opiate cough suppressant is out of stock. You spend three days sleeping in half-hour dozes, propped on pillows as a humidifier puffs steam into the cold living room. Your upper lungs ache with every inhale then erupt like miniature fireworks.

You go back to the pharmacy and give your name to a woman in a white smock over tangerine leggings. Blank-faced behind her name tag, she tells you that your prescription is ready, but their network is down. She announces with a shrug, You can wait if you want to.  You don’t want to. You crave solitude and rest, not this ugly florescent display of knee braces and chew-able calcium.  Keys in hand, you pace outside under the leafless trees as cars skim down Broadway, then step back in, under the shining corporate logo. You wander the aisles and pick up a small tube of Red Dahlia lip balm, its weight like a talisman in your palm. A hazelnut chocolate bar makes it way to your jacket pocket. Sitting on a plastic chair, you listen to other sick people complain. After a wheezing cough, you tint your lips and feed yourself soothing squares of dark chocolate. You press hazelnut crumbs slowly between your teeth until the system comes online again, and you can go home and sleep.

Another year goes by. At the hardware store, you eye wilted yellow pansies so leggy and forlorn that they are on sale for fifty cents each.You pay for three sets, and see yourself taking more. You are not thinking about the sadness on your son’s pale face as he looks out at the world. You are not feeling tired for him, for everyone. In the sunshine, you lift flower packs into the back seat of your station wagon, counting one, two, three, four. At five, you smile your mother’s smile and drive away.

Her stealing smile is mine. Her flowers and her hands are mine.

In her late sixties, my mother’s thieving was done with remorselessness and with grandmotherly confidence. 5 foot 2 and a hundred pounds with her coat on, she embodied a sweet charm and a don’t-mess-with me toughness.  She flew from Florida to Denver to help when each of my three babies was born. Sober and happy, she cooked dinner every night and caught us up on laundry. Once when I thanked her for all of her help, I added, And thanks to Dad for letting you come!

Her face clouded over, eyes dark as night. Then she snapped: Nobody lets me do anything. Truer words were never spoken.

Mom was never questioned when we left the checkout line at King Soopers and picked up sun-loving petunias on tall racks outside the door. As we placed flower after flower after flower in the warm dirt, she said, Aren’t they pretty? And I only paid for two of them!  She laughed the shiny laugh of a girl. Her eyes sparkled.

Mom! You stole! I was terrified that she could have been arrested. I was barely thirty and still getting used to being people’s mother. 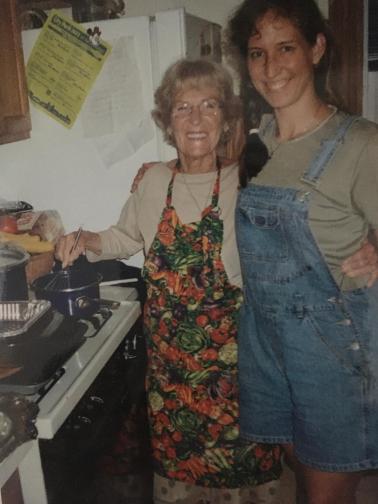 They can afford it, don’t worry, she replied, her smile impish and satisfied. There has to be a “they,” who can be outwitted. The thief in us knows this and feels satisfied.

Nobody lets me do anything.

The pansies I stole this year would have been thrown away by now, tossed in a dumpster with that first early snow. Instead, I’ll plant them in my fall garden over daffodil bulbs. They will survive the winter, content under a blanket of mulch. Their yellow and purple blooms will glow in the spring sun. Again and again, they will fill me with surprise.

Jenny-Lynn is a former psychotherapist living in Denver and in South Park, Colorado. Her essays have appeared in The Colorado Sun, Pithead Chapel, and Dreamer's Creative Writing. She blogs at themoreiwrite.net and can be found on Instagram @writeriderepeat.

I’m sorry to have to say this my dear, but had your mother’s skin been a darker shade, I’ve no doubt she would have been stopped and a cop called, with some very rough language and actions involved. You too. Making fine excuses or rationalizations for our behavior doesn’t change the act and its effect.

No excuses or rationalizations, and a hefty dose of awareness of the white privilege that kept us from being roughly arrested. Appreciate your comment!

You are so courageous in your vulnerability!

I found it so interesting to read about you stealing. That is osmething I never knew about you. My brother also does this routinely. He never gets caught which I attribute to white privilege, and also the fact that he doesn’t get bothered/nervous about it at all. When Vanessa was sick it really made me nervous. I thought, well if he gets caught he will be able to justify it by his overwhelming stress from taking care of her.

Thanks for sharing your imperfections. 🙂 I love you! “Be kinder to yourself. And then let your kindness flood the world.” Pema Chodron

*CONFIDENTIALITY NOTICE: The information contained in this message is legally privileged and confidential information intended only for the use of the individual or organization to whom it is addressed. If the reader of this message is not the intended recipient, or the employee or the agent responsible for delivering this to the intended recipient, be advised that you have received this email in error and that any use, dissemination, forwarding, printing or copying of this email is strictly prohibited. If you have received this email in error, please notify the author immediately by replying to this message and deleting the original message. Please note that email is not guaranteed, confidential communication but this is an effort to protect intended recipients. Thank you.*

> Jenny-Lynn posted: “Shoplifting is danger. Shoplifting is defiance. > Shoplifting is compulsion, and it is satisfaction. You steal without > thinking or feeling, but you wonder later if you might have been angry, if > there was some sign you missed, something you shouldn’t have be” >

Wendy, it’s funny for me how I didn’t know I was going to try to justify anything until it was over. No excuse for the unkindness inherent in theft, or the white privilege I hated myself for wielding. And compulsive behaviors are out of immediate conscious control. My life has had much healing in that regard, and I am immensely grateful. Thanks for your presence here!

A self-revealing post! I don’t remember shoplifting, although it seems to be something many children do, at least once. I remember a time my younger brother did. A toy, think. Mom shut off the stove and took him back to the store, made him go in to return it and apologize. I was 10 or 11, so he must have been 7 or 8. We were poor all my childhood, but not dirt poor. Working class poor. Yet I think now, because of your piece here, that my parents, who never went to church, never got educations, never did better than their own parents, nonetheless somehow acquired strict moral codes. The severest punishment I ever received as a child was for lying. Thou shalt not lie, steal, give any job less than your all. I never saw them fail to observe those commandments. How parents shape us. Leaving an office job to become a teacher, I took home half a ream of paper, a box of paperclips, some pens and felt guilty doing it.

Thanks for your thoughtful response! I was also caught shoplifting by my mother and had to return a small toy to the store along with an embarrassing apology. No doubt, my mother had similar lessons growing up. Ironically, perhaps, my conscience was in charge on the job, dictating I return a work pen if I thoughtlessly tossed it in my bag.
Self revelation is no substitute for good writing or a meaningful story, alas, but there’s hope for us sinners nonetheless.